Let Me Love You

We sat around my in-laws’ dinner table, sipping coffee and sampling my latest baking experiment.  The discussion meandered around to the topic of marathoning.  My father-in-law, a talented poet, dug out some limericks, penned after several notable races, including his first half-marathon.  He comedically recounted the experiences that anyone who has run races knows.  Feeling the rush as you dash off from the starting line with hundreds of other runners.  Fumbling awkwardly through the first water station, trying to guzzle the Gatorade while keeping your pace.  Hitting a stride in mile three, telling yourself, “I feel amazing! I am gonna kill this,” all to have the enthusiasm dashed in mile nine when your legs start to feel like rubber. 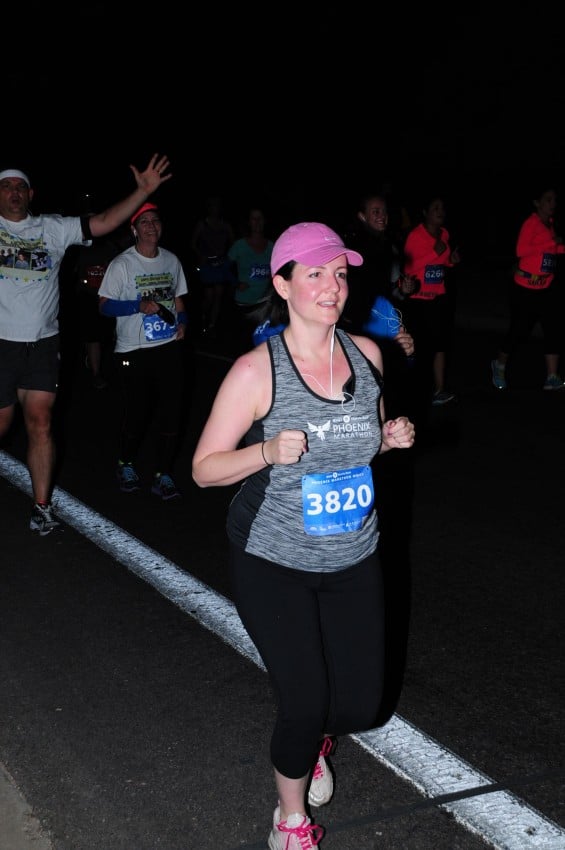 I was able to laugh along with his poem, having run my first half-marathon in February, remembering my own experience.  There was, however, a key point of difference in our half-marathon stories.  He recalled seeing his friends and family, cheering him on as he neared the finish line.  He gained momentum in the final stretch, being carried by their encouragement and excitement.  Me on the other hand,  I was blasting Uptown Funk to get through the final leg.  Other than my friend who was in the race with me, there weren’t any familiar faces greeting me at the end.

It’s not because I’m related to a bunch of unsupportive assholes.  Quite the opposite.

It’s the end of July in Phoenix, which means it’s that part of the summer when you feel like it hasn’t been less than 95 degrees since forever, and there is no foreseeable end to the heat.  Days are spent scurrying from the air-conditioned house to the air-conditioned car to the air-conditioned mall, circling the parking lot, seeking the smallest sliver of shade from a palo verde tree, hoping that your car won’t feel like the seventh circle of Dante’s Inferno when you return.  As children of the midwest are cooped up in the frozen month of February, our kids are similarly shackled to indoor activities through July and August, save for the aquatic oasis of the neighborhood splash pad.  Thing 1 and Thing 2 needed to get out of the house, so I pried myself away from the laptop, tossed together swim gear and slathered on the Coppertone.

The splash pad was full of kids.  Parents were standing guard, happily watching their kids burn off the pent up summer energy, eagerly anticipating the naps that this sunny activity would hopefully inspire.  Ryan had packed a few water toys for the kids, including a blue plastic bucket.  Blaise ricocheted from end to end of the pad, leaving his bucket in the middle of the fountains while he imitated a human pinball.  One of the bigger kids at the park, nine or ten years old, grabbed the blue bucket in order to heave water at one of his friends.  When Blaise refocused and went looking for his bucket, I happened to catch his face when he realized the bigger kid had it.  His lower lip curled and he started to cry.  Ryan walked over and asked Blaise why he was crying to which he replied, “I want my bucket!”  My ever so patient parenting counterpart noticed the other boy had the bucket, then said, “did you ask the boy if you could have your bucket back?” Blaise hesitantly shook his head, denoting that he had not.  He sheepishly gazed up at the boy, who had ceased his splashing along with a few other kids when Blaise had started bawling.  Blaise is only three and not particularly advanced in his communication skills yet.  He looked at the boy and held out his hand, Ryan gave the knowing nod to the other kid, saying, “sorry, can you give this little guy his bucket back?”  The boy kindly returned it and then went back to blasting his friend with a Super Soaker he had since procured.  Blaise wiped his tears and gathered up puddles alongside his miniature personal shadow, Calvin.

Calvin and the bucket

Back to the half-marathon.

No one was at the finish line because I didn’t ask anyone to be there.  I was like Blaise crying about the bucket.  I hadn’t taken responsibility to inform people what I wanted and engage them in the opportunity to love me.  The boy didn’t know Blaise wanted his bucket back just like my family didn’t know I was running a half marathon.  It’s hard to get what you want when you don’t say anything.

Why would I keep this from them?

My alcoholism fueled itself with the power of belief that I was unloveable.  As I wrote in my introductory post, I had convinced myself that I was only worthy of love if I worked for it.  Thus, I trained for and completed an entire half-marathon without sharing the experience with any close friends and family aside from the friend who was also running the race.  I subconsciously convinced myself that I didn’t deserve to have them there.  Ryan knew I was running the race, but I told him it wasn’t important to be there and that the early morning would be tricky to coordinate with the kids’ schedules.  But, really, I wanted him there.  I wanted my family there.  But, I didn’t ask them to be there.  It’s not that they don’t love me.  They love me beyond what I can comprehend! I didn’t give them the opportunity to show their love.  I cut them off at the pass because my illness took comfort in the idea that I was unlovable.

All I had to do was ask and I didn’t.

Ryan took the time to teach Blaise the importance of asking.  God taught me the same lesson but with a much bigger bucket.  It was a few weeks after the marathon that I came clean about my alcoholism to my family and asked them to love me.  They always had and still do, but I was finally broken and able to accept their love.  The reflections of this week remind me that my dysfunction was so much  bigger than booze and I’m absolutely thankful for how much my heart has changed.

For some of us, it’s hard to ask for what we want.  There is risk that you might not get your bucket back even if you ask for it.  Or maybe, you feel like you don’t deserve to have the bucket returned.  Both of these positions are based in fear and fear is the opposite of love.

1 John 4:18 (NIV) : “There is no fear in love. But perfect love drives out fear, because fear has to do with punishment. The one who fears is not made perfect in love.”

We are loveable and people want to love us, but they are not mind readers.  Love doesn’t magically happen.  You have to ask for it and, more importantly, accept it.  Let people love you.